they are all awarded with the order of V-Rab during the try of brakeout 24Aug 2010.

And now is time for another award.

This time i want to reward a group of teams,called the Axis Squad Alliance.

This teams,even in the darkest hours for the axis side,did a great job,trying to break the front and trying to turn the map.

The ASA nights was allways really fun for both sides,not only for the AXIS side,so i think that its time to reward this hardworker squad.


So im here to give to the Axis Squad Alliance the:

Branch Specific. Awarded to Branch officer for her/his efforts in game. 3rd Class designation refers to efforts like helping the new players rank up, always helping the other branches, always respectful to others. This award can be issued by Korps level up.

250h-Blitzkader-Jagers PLS STEP FORWARD!!!
With the approvation of Vondoosh,today im here to reward this 3 fine squads,3 of our best squads,maybe not the biggest but for sure the most cooperative and allways ready to give an extra hand when and where is needed.


Im really glad to reward u with the:

Awarded to players and officers that show true Axis honor. These players have proven time and time again they are here for the Axis Side. Commitment and dedication is what they are about. Axis HC holds recipients of this medal in the highest regard.


Not only for your great work during the EUSN,but most important the daily work that u guys do every single day.guarding FB,sapping FB,placing MS and towing ATG all around the map,guarding the vital CP and giving allways a great help to the OKW. 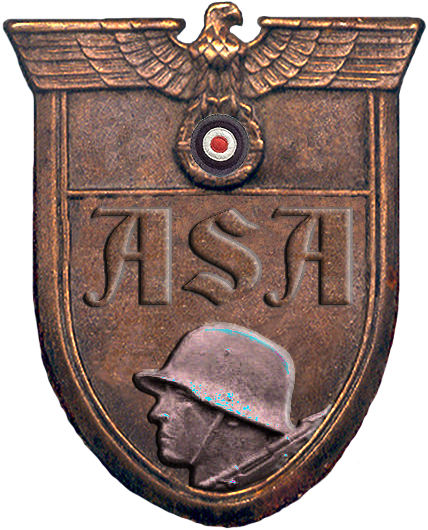 As agreed by the squads of ASA as part of Operation Hnoss, the next squads are exceptional granted the ASA Co-Op Participation Award (bronze). This for recurring helping out in passed co-ops since the transformation of ESA into ASA.

OKW is proud to present you with Iron Cross 2nd class. I know that you have spent countless hours of filming and editing material. When you play, you are always doing the things that anyone asks you like driving MSs, slacking in bunkers or FB's or filming new material Also you are always guiding new players and boosting the morale of the axis players. You the most hard core axis i have seen in this game so far , S!
Kalma

The king of kings and imo, as expressed once before when i nominated Koopman to MVP, the best example of a true WWIIOL player as the PB should be. Kalma have noted what is most mentionale in his post. One more thing that have stunned me, is the approach you and the guys you often encourage and lead, take to certain tasks. Taking up to makie sure FBs on Axis AOs stay Axis as a personal challange and take that to hard for month on end, is simply amazing.

:-) The guys of the future will see what the war was thnaks to guys like kappa and koopman :-)

The following squads I, The Country XO present you all and everyone in your squad the Fur Ehrenhfte Aufgaben Medal.

For you dedication and hard work for campiagn 56. Your game play on the Battlefield and leadership earned you this award.

Medals awarded for efforts of the past Euro Operation 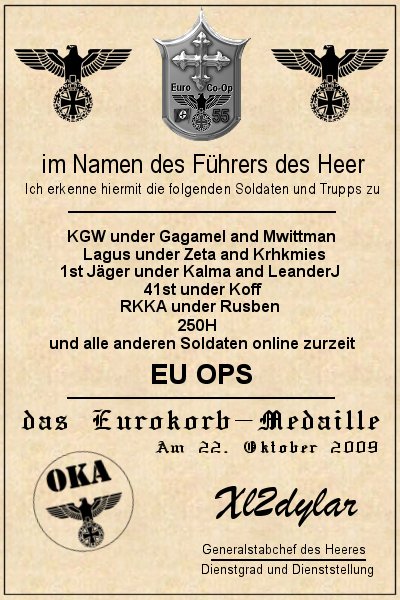 I received this from Gagamel and would like to express my appreciation to the Squads/Player for their excellent work. I am honored to award the following to those players listed below.

Order of Petro: This medal will be awarded to players that go the extra step for the Axis. These players are what make the job of the HC work. They will be regarded with honor by the OKA.


After yesterdays tremendous Axis victory, i would like to show personal appreciation of certain ppl's efforts during the critical first 7 hours of the 12 periode of the 2 routed divisions. I think the actions of these individuals or squads saved the Axis front and made the routing to an even bigger Axis advantage than allied, as the repelling of all most every allied effort put frustrations and demoralisation into the allies that tried to break us during that time.

I managed EU squad coordination on our OiC ch with first Jamesi and later Kalma on as OKW OiCs.

When i logged in some ppl finished of first allied Maubeuge attack around 17.00 CET, by blowing all FBs.

RKKA under Sclar worked all night on taking down and then defending the Chimay - Hirson FB, and did so succesfully with help.

41st. under Koff attacked and held Chimay FBs allhtrough the night along side RKKA.

91st. held Avesnes - Maubeuge FB under Boycey and later under Leopold went into offensive actions against both Chimay Hirson and Trelon FBs through constant para- and groundmissions.

KGW under myself on Maubeuge - Mons and Berlaimont FBs allthrough the night, 7 hours. Berlaimont FB never went down. Also helped on the iniatial and vital FB take down of the Hirson - Chimay one with RKKA as the allies rushed town.


Tom77 for the usual insane ET and ATG extermination at Ninove, Chimay and Maubeuge.

This award is offered to any player or officer that took part on the successful attack and capture of the towns of British Islands. Was given for first time on April 9 2009 on campaign 51 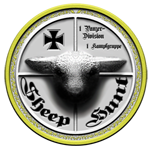 the push on vlissingen.

Awarded to a player or officer that has dedicated his/her time to lead the playerbase. This award is given to those that have been noticed on more than 5 occasions taking OIC duty. DB 26 - level 220 - type free

Awarded to individuals for meritorious service in the superior performance of their duties.

This award is issed to individual officers that show continued team effort. An Officer that goes above and beyond the call getting things team orientated shall be eligible. Issued by Korps level up. Should always be more than one officer recieving it.

Awarded to an officer or player that has shown meritorious service to the Axis Side. This can be from gaurding a bunker, running supply, ht/opel driver ... This award is highly regarded and the recipient of this is held in the highest respect by OKA. DB 18 - level 100 - type free